Evolution of Product Implementation: Building to succeed at every stage 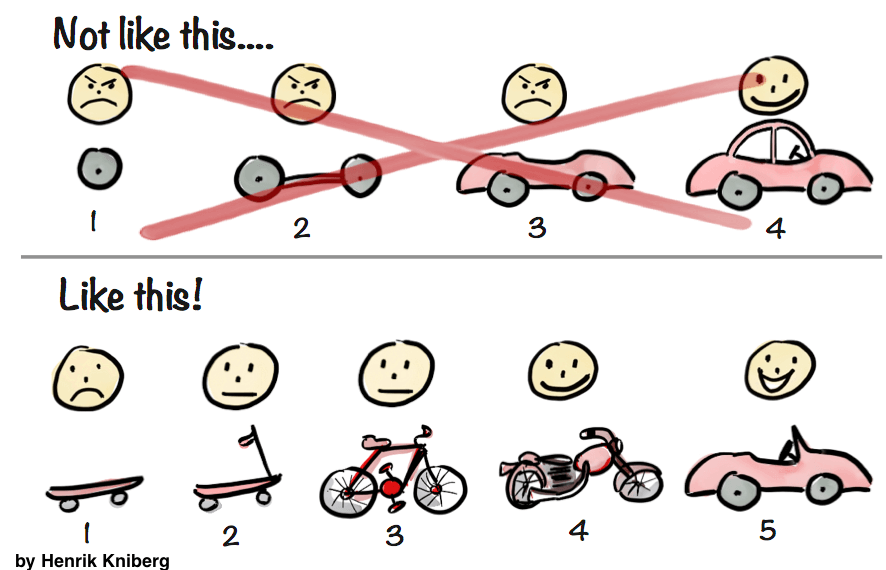 Above is a popular illustration by Henrik Kniberg about the process of delivering usable products.

The image above illustrates that one key to a successful build is to aim for a usable product at each stage, though it may be very different from the finished product.

As Kniberg illustrates, if the desire and end goal is to build a car, first it’s necessary to assess a car’s functionality and use. What is a car’s primary purpose and core function? To transport people from point A to B safely and quickly.

With that in mind, the question is “What can we build in this iteration that can transport people from point A to point B?”

A skateboard can be a good starting point. Obviously, a skateboard is no car but it shares the same baseline function as a car as a mode of transportation.

A second iteration may aim to build a scooter. Still not a car, but a scooter offers steering and more control than a skateboard. And though physically different from a car, the scooter keeps in line with a car’s core function of getting from point A to B.

The build then may progress to a bicycle, functional and faster than a scooter yet still consistent with a car’s primary purpose to transport its user from A to B.

The next iteration may be the transformation of a bicycle into a motorcycle and finally, the desired finished product, a car.

Consider this track of development in comparison to the often assumed path of starting with a car tire, to four tires, then the car body and finally a completed car.

It’s evident which development track offers more value and use at each iteration. This understanding of the evolution of implementation is key in building a successful service or product.

This concept translated to a larger scale is apparent in the evolution of major services. Twitter, though drastically evolved throughout the years visually, kept its primary focus on their social media functionality. YouTube, also evolved vastly over the years aesthetically, kept consistent in its core functionality as a video platform.

Many clients are new to this approach and see specific, successful brands as a starting point: “We want to be the next ‘fill in the blank (mega social media or product company)’.” While keeping specific companies in mind as aspirations can help fuel vision, it’s essential to also note the states of these brands or companies before arriving at their current identities.

The progress and growth of each of these companies was possible based on an understanding that their first step was not their last, the start as a skateboard was not to be the finish of the desired car. The key being to keep perspective of product releases through iterations as “not yets,” but functional “not yets,” usable before the current identities.

This aim for usable iterations, different from the complete end goal, allows the build of a product or brand to be successful at every stage and ultimately, successful as a whole. With this type of client mindset combined with the guidance and expertise of a company such as DOOR3, the evolution of implementation can maximize in value at every stage.

Nayoung Kim is a User Experience Designer at DOOR3. 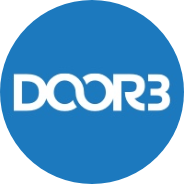