New York, NY – August 8, 2012 – DOOR3 is happy to announce the launch of DraftStreet’s new mobile site, released August, 2012. Formed in 2009, DraftStreet is a fantasy sports giant that revolutionized the industry as we know it. Bringing popular online poker concepts to fantasy sports, the platform allows users to go head-to-head with any competitor in its arena for a single game as opposed to the typical fantasy sports model of playing against competitors in established leagues spanning an entire sports season. 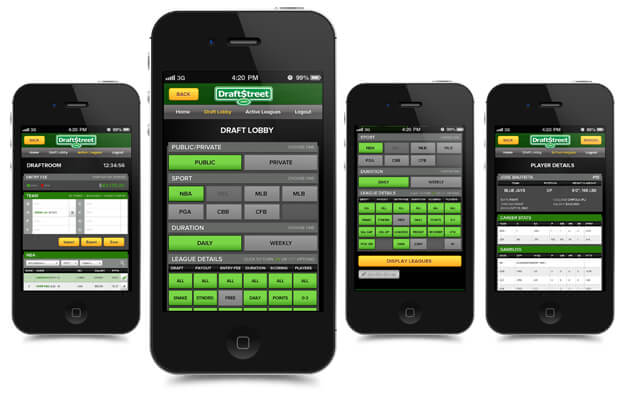 Given the urgent nature of the daily fantasy sports business, DraftStreet sought out DOOR3 to design a user-friendly, forward-looking mobile component to its website to empower its users to participate anytime, anywhere. The original DraftStreet mobile experience was conceived of as a native application though mobile web utilizing responsive design was later chosen for its versatility over a range of different devices including iPhone and Android. DOOR3’s expertise was also utilized to streamline and optimize user experience on DraftStreet.com. While DOOR3 is well-versed in cross-platform usability, one unique challenge in designing the DraftStreet mobile experience was in presenting the breadth of stats and other information critical to fantasy sports in a way that was intuitive and usable on a much smaller screen size.

Says John Malloy, Senior Designer on the project, “Being both an avid sports fan and a UX professional, this project was right up my alley. That said, the large data sets in fantasy sports management can pose some interesting interface challenges, even on the web, so shrinking things down to mobile amplified many of these obstacles. After several rounds of brainstorming and much trial & error, I really feel that even the most fanatical DraftStreet users will be able to have a top-notch experience, and all while enjoying the freedom of accessing DraftStreet from anywhere on their mobile devices.”

The resulting app includes all of DraftStreet’s most-used features such as the ability to join and view active leagues, set ‘Daily Pick ‘Em’, Salary Cap and Home Run Derby lineups, follow live scoring, export and import lineups from other leagues and last but not least the ability to sort available leagues as well as players by team, salary or fantasy points per game, all using categorization identical to the main website.

According to RotoGrinders, (The Daily Fantasy Games Authority), “the DraftStreet Mobile Site is one of the best, if not the best, mobile sites in the business. They offer a number of key features that allow users to seamlessly enjoy daily fantasy sports on their smartphone or tablet… It touches every base for a great mobile daily fantasy site and should really impress you. Not only is it functional, but it is fashionable as well.” A full review with features discussion and screen shots is available on the RotoGrinders site at: http://bit.ly/130rqcL

Join Leagues + View Active Leagues – Sign in on your smartphone and immediately you are given the choice to join new leagues or view your current leagues.

Set Your Daily Pick Em, Salary Cap or Home Run Derby Lineups – The best aspect of DraftStreet’s mobile site is the ability to actually set your lineups from your phone seamlessly.

Sort Through Available Leagues with the same categories as their actual site! – Whether you want to sort by league size, sport, buy-in or game type, you can do so just like you would from their regular site. Sort through the player pool by position, team, salary or fantasy points per game – Ready to pick your lineups? Well just like you could on a laptop, you can sort through their player pool by player name, team, position, salary or fantasy points per game.

Export and Import lineups from other leagues – This is the tool that will prove most useful for the DS faithful. Easily export and import your lineups across multiple leagues right from your mobile device.

Follow live scoring from your Active Leagues – Once the games kick off you can see a live scoring feed to all of your games for that evening.