Developer’s Corner: Ruby....The What, Why and When

By Ruby..you mean the gemstone, right?

From my experience, when non-developers hear about this fascinating programming language for the first time, they tend to think it might be something new or rather outdated, something limited and not broadly used in the industry since its name doesn’t include any plus signs, hashtags, dashes, or a weird acronym. While the story of its naming is not that intriguing, what’s really is interesting is what Ruby has evolved into since it was released to the public in 1995.

Ruby is a completely free and an open source technology that has been extremely active and continues to grow at a rapid pace. People are constantly developing new tools to use, writing software for easier conversation with different API’s, updating the already easy to read documentation, and blogging to share their know how.

Ruby in the wild

Since its release, a lot of instruments and frameworks have been created to ease the development cycle and aid in speeding up the development process and workflow. One of those tools is Ruby on Rails (RoR).

RoR is a great tool that allows engineers to model website features quickly and gives a better estimate on tasks to be completed. It is especially helpful with the Agile projects because of the rapid development nature. A lot of organizations like Basecamp, Hulu, NASA, Twitter, GitHub, SoundCloud and many others utilize the power of Ruby everyday.

Not only do clients like working with Ruby, but developers (myself included) love it too. Even though it was developed in Japan it often reads like plain English making it clean looking, easy to understand, and simpler to read and maintain.

Don’t believe me? Read these examples out loud:

Pretty cool right? The fact is the web isn’t a static place anymore and Ruby can easily handle enterprise loads of traffic and can protect you from Cross-site Scripting Attacks (XSS) and SQL injection attacks without a big of an effort.

Yup, Ruby is great, but the truth is…

Like any other programming language it is good for certain things but not for all of them, unless of course its your favorite language…then its the ultimate!

Here at DOOR3, we have a lot of experience with all sorts of programming languages, however, the choice of tools to use always depends on the project and takes careful consideration and planning. Ruby on Rails is great for building web applications, dynamic and interactive web services, content management systems (CMS), on the other hand, not so much. It is 2x times slower than PHP, email processing capabilities are low, it is not great at scaling and not as good at image manipulation as other more efficient technologies out there, such as Drupal, WordPress, Joomla which run on PHP/MySQL.

In the end, it is all about knowing what kind of project you have, what advantages Ruby brings to the table and having a team of engineers that knows how to harness the power of tools and many useful features Ruby has to offer.

Val Mitchell is a Front-End Engineer at DOOR3. 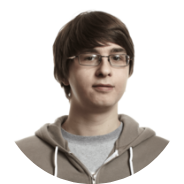