There are times in everyone’s life when we know we must sit down and do something unpleasant for our own good: prepare a tax return, make an OkCupid profile, delete an OkCupid profile, shave our toes, etc. Forcing yourself to learn a new API can seem just as un-fun but often it must be done.

ASIHTTPRequest. What can I say? I don’t have a problem with it. I love it. It’s simple and allows me to quickly whip up code that sends HTTP requests in only a few lines. Here’s an example where I send a Post and a File:

I love this: set the Post value and its key, I set the File and its key, I make myself a delegate and start the upload! The protocol notifies me when it’s done and I can move on.

Sadly, ASIHTTPRequest was written by one man who got tired of dealing with his screaming fans and critics. So he decided to abandon the project. Such is the blessing/problem with Open-Source projects: they are free/tenuous. While the code still exists (and still works) he will not be updating it for any future iOS version. He even said in his blog that it was time for us all to move on. Enter AFNetworking.

The good people at Gowalla (formerly Alamofire) have created an HTTP request API that many people are beginning to use. But I mean beginning. It’s just really new. I even peaked into someone else’s code that I saw implemented the library from AFNetworking to see how they were using it; they aren’t tho. They included it and abandoned it to keep using ASIHTTPRequest. :)

So as far as documentation goes there is still not a lot out there. This leaves me in the position of having to teach myself.

One of the best tools in Xcode is its ability to show you the documentation for an element in two clicks. To my great surprise, I found that you can install documentation for 3rd party APIs too if they supply it which Gowalla does. But you must acquire a tool called appledoc first and install it. It comes as an Xcode project AND includes an installer shell script. So if you use that you’ll be on easy street. Then follow Gowalla’s instructions for installing their documentation from GitHub. Now when you need documentation for an AFNetworking class, method, etc, it’s available in the same place as the Apple Foundation documentation! 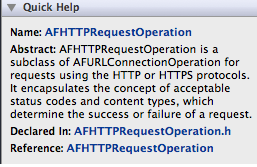 Now, this was tough. The code necessary to do the same thing as above is much longer (I don’t see how this is a plus. I like things succinct.)

Ok. That code is crazy difficult to read at a glance. Let’s break it down.

This inits a new instance of the AFHTTPClient object which is where you will often do the heavy lifting in this API. Note the convenience method for putting in the URL in its initialization. But also note that this is the base URL. This allows us to make easy calls to other relative URLs we need just by adding the /[directory].

Makes sense. That’s what we’re really doing: Making URL requests. Here we use our instance of AFHTTPClient to begin pulling the information we wanna put into our request.

We’re gonna Post to the web directory for photos which is one off of our base URL. We could also Put or Delete.

This I still don’t know. Someone email me and tell me. :)

“BLOCKS!!!!!?????” Yes. Blocks. It’s time to become a man and use a block. And now that I have, I ain’t scared any more. It seems to me that blocks work like little functions within methods. I guess this saves us a little space by not having to declare them, etc. But they are very intimidating. Especially when you aren’t taught them in your intro to iPhone courses.

Picture a block thusly: it’s a function that can be called as an argument. When I say it that way it’s REALLY useful sounding!

After the colon you put a carrot (^) to define the beginning of the block. That’s followed by the return type (in this case an instance of AFMultipartFormData object called formData. Open a curly brace and start the function!

One message and we’re done with this one. But hold up. How is it that we are using the return in the function? Well, maybe ‘return’ is the wrong word. What it really is an argument? An argument that’s populated by the method calling it? Oy. …

formData is an instance of AFMultipartFormData that the method gives us to play with in the block (glibly.) And in this case we are taking that instance and populating it with the data we want sent in our HTTP body:

the file (in this case a photo),

the ‘fileName’ key (which here is just the ‘name’ with an extension.

Now close that block AND the original message!

When you look at it that way, we now have our HTTP Post request ready to go. In ASIHTTP you would just tell it to startSynchronous or startAsynchronous to get it on its way. Here we must accept that good apps make use of Grand Central Dispatch.

AFHTTPRequestOperation inherits from AFURLConnectionOperation which inherits from NSOperation. NSOperation is the class that allows us to encapsulate individual tasks and pass them to the processors with more control. We can take tasks and queue them up by threads and the compiler or the OS or something actually knows which processor core to put them on so that they can run concurrently!

The benefits of this are obvious: pass this on to one core so that other tasks are held up waiting for your broken-url to timeout or your huge file to upload over Edge. When used properly, you can avoid HTTP related locks to your app.

BLOCK ALERT! But it’s helpful again. This block analyses our upload progress for us and gives us the data to do with as we please. Break it down: it’s giving us 3 ints to play with:

Wanna make a progress bar? Here’s its model! This block runs EVERY TIME A PACKET IS SENT giving us useful variables constantly updated. (I’m really starting to love this stuff!)

Turns out you can’t put these NSOperations right to work. You have to put them in an NSOperationQueue. Wish you didn’t have to. Wish you could just send them a start message and they’d go. Maybe someday.

Compile and go! Watch your app post an image.

If you’re looking for the solution of replacing ASHttpRequest with AFNetworking, contact us today! 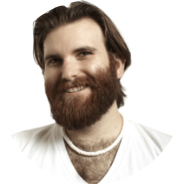